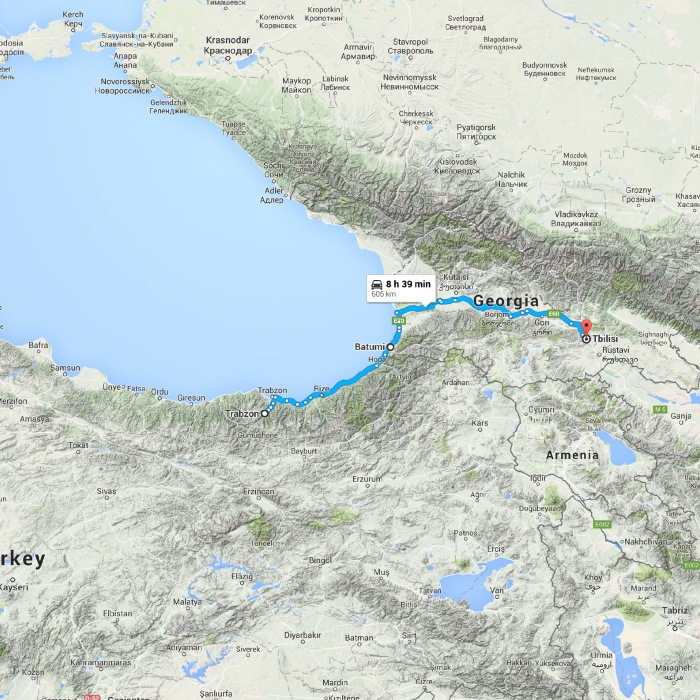 Its been an invigorating couple of days. We’re moving more and more into the world of the unknown now and there’s an excited energy to us as we venture further from the comforts of the west. 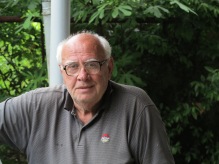 Georgian hospitality has been extremely welcoming but at the same time rather forceful. I say rather to put it lightly. A prime example of this being our night in the foothills of the mountains that was smack bang in the middle of Georgia as well as being smack bang in the middle of absolutely no where.  As soon as the old man shuffled out on gout ridden steps to welcome us, half burnt cigarette hanging out from a gap toothed smile that was playing across his age worn face we knew we were in for an ‘authentic’ night. If there’s two things Georgians don’t mess around with it’s eating and drinking..

And so we ate. And drank. And ate some more.. Every time we even looked like we were giving up on the monstrous pile of food in front of us we’d get a stare, then he’d pat his rather impressive belly as if to say, you’re not going to get an amazing figure like mine if you give up now, keep going. And so we kept going. I’m not sure I’ve ever eaten so much.. Then there was the drinking. He has his own vines out the back and the wine they produce is actually rather tasty but it turns out we’ve been drinking wine wrong all these years. One does not enjoy wine. Apparently one downs wine. Constantly. And then chases it with vodka. It was a big night. 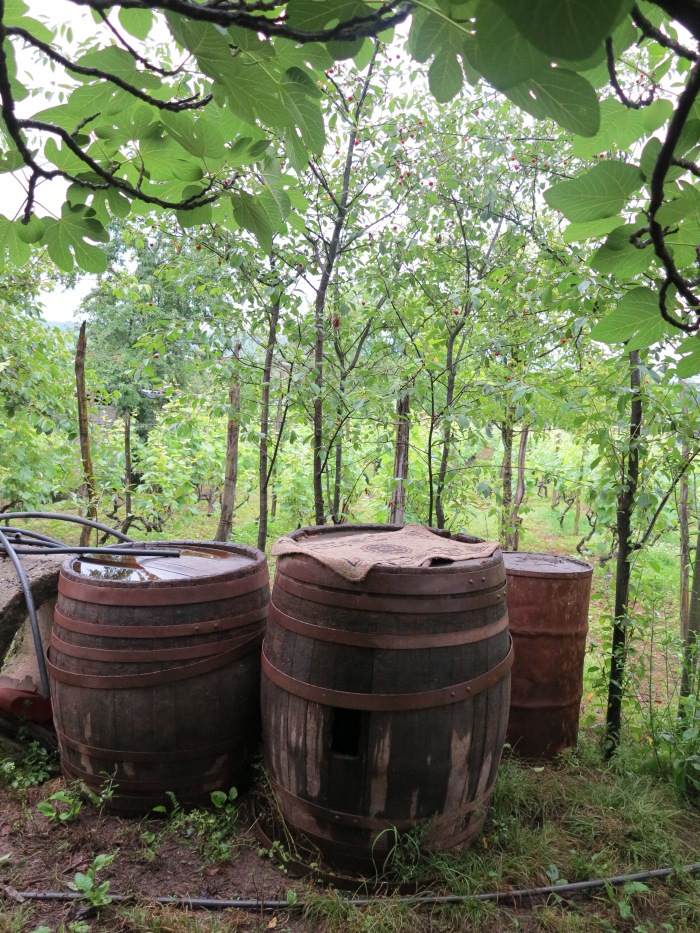 Home made wine maturing away.

Frolicking in the mud.

So we had a little tumble in the mud the day before yesterday. Nothing too serious, more bruised egos and pride than anything else. It had been raining for the majority of the night and so everything was wet. We were wet, the roads were wet, the herds of cows strolling across the road with looks of disdain for the waiting vehicles, were wet… That wasn’t too much of a problem when we were happily cruising along on the tarmac, it did become a problem however when the road ended and the muddy track began. Google maps and Georgia really need to get together and decide on what they’re going to classify as a yellow A road…

Apparently this is/was a major road.

Thankfully we’re on adventure bikes so a bit of mud was actually rather exciting. We had a great time navigating the copious amounts of potholes, sliding around corners and generally just looking cool. Well in our minds anyway… That was until Bruce’s front wheel got caught in an overly deep ditch, and he ‘gracefully’ spun around and fell off. Whilst this was all going on, the intercom, suffice it to say was blaring some rather colourful language from his side. I won’t go into the details, but upon hearing all this I completely forgot that I was riding a motorcycle myself and turned to have a look. Idiot. Down I went as well. And so there we were, two chaps sprawled across the road with mud up to our elbows and bikes facing in defferent directions. Of course it was exactly then that a train had to come trundling passed so all the passengers could ogle at our predicament. 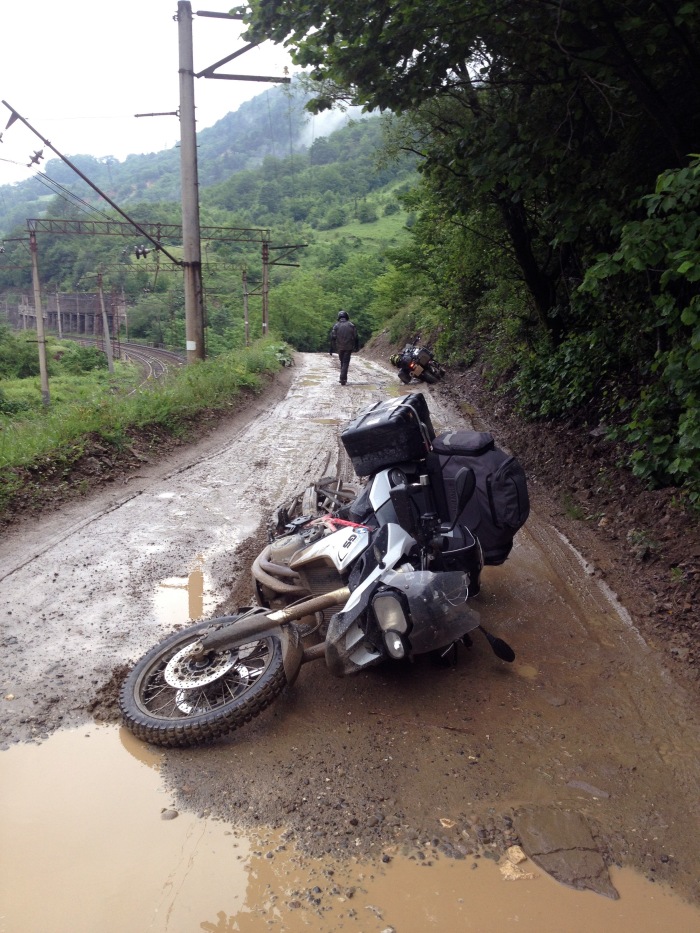 Not the first, won’t be the last. 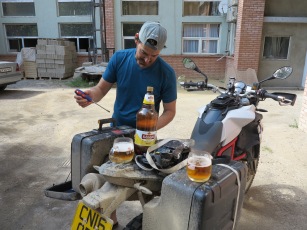 Yesterday was a day out of the saddle where we used the time to explore old town Tblisi, try multiple varietals of Georgian wine just to make sure we weren’t missing out on anything and more importantly fix the bikes. There’s something extremely satisfying about drinking a 2 litre beer out of a plastic bottle in the dappled sunshine and to use Bruce’s eloquent prose, ‘fixing shit’. Bruce’s panniers are now permanently fixed to the bike and duct tapped on for extra piece of mind, my bike survived relatively unscathed, it did however need a mirror and hand guard readjustment. I won’t bore you with the details but I like to think we’re basically professional motorcycle mechanics now.

One other thing to mention is we picked up our Turkmenistan transit visas. 11th to the 15th of June is all the time we get to ride through the unending Karakum desert that spans more than 70 percent of the country in a shifting mass of sand and sun. Lets hope the Caspian sea ferry isn’t too delayed… 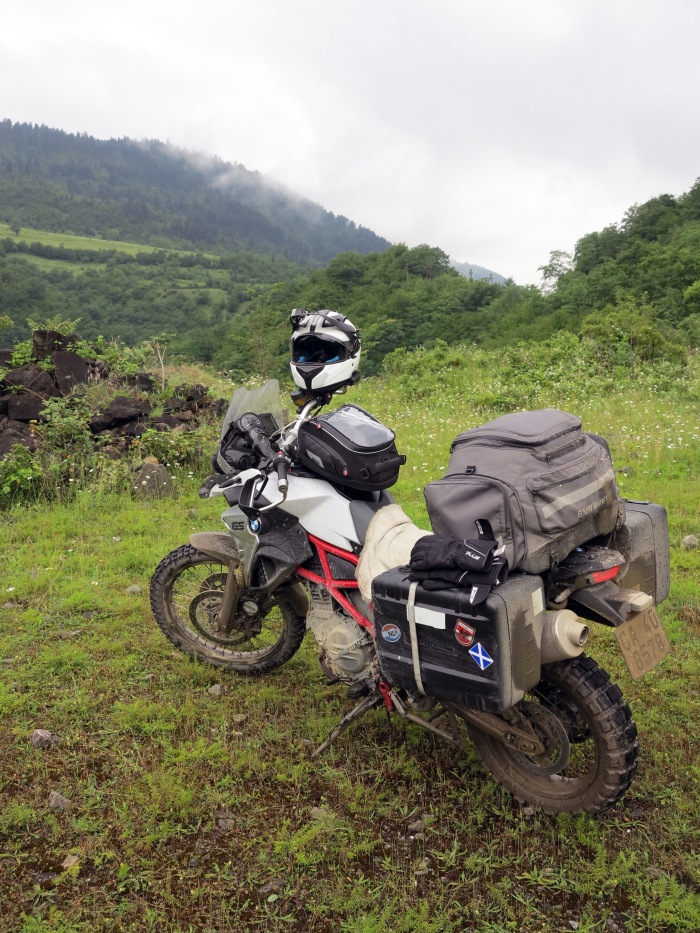 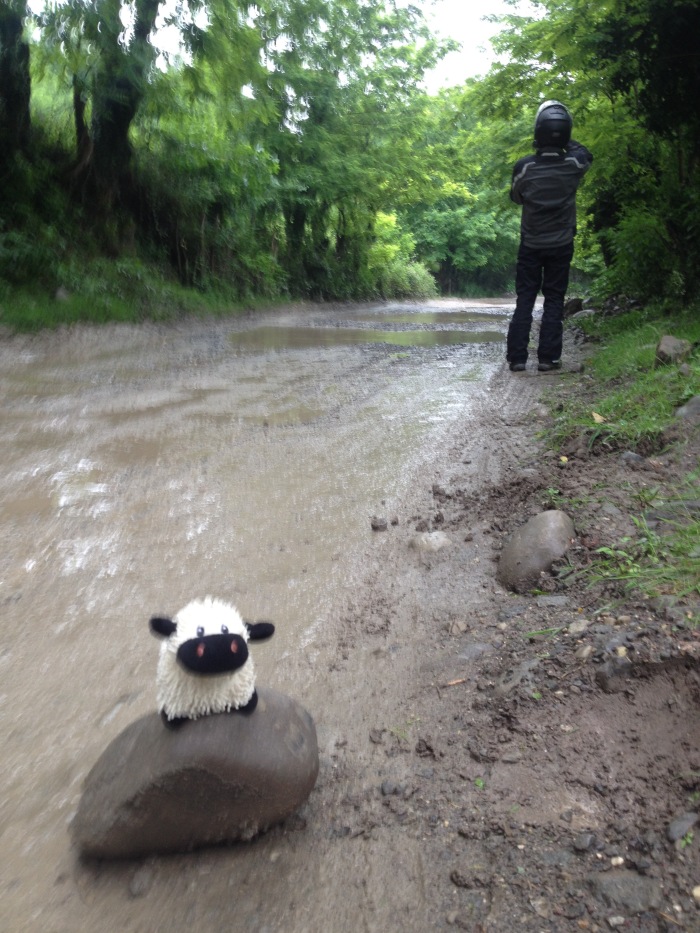 Scotty in the mud 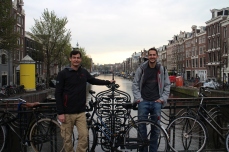 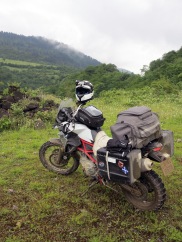 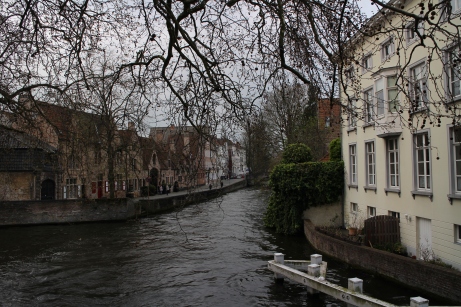 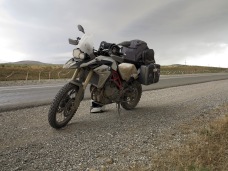 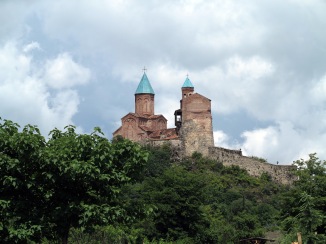 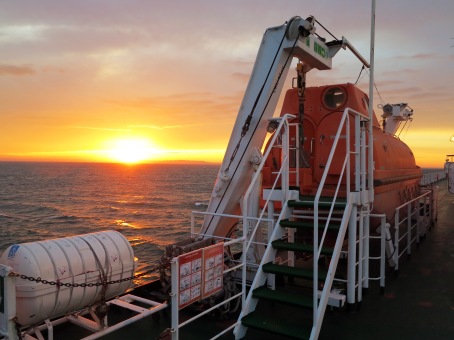 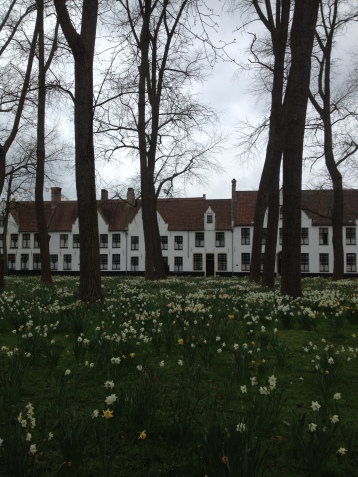 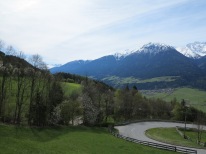